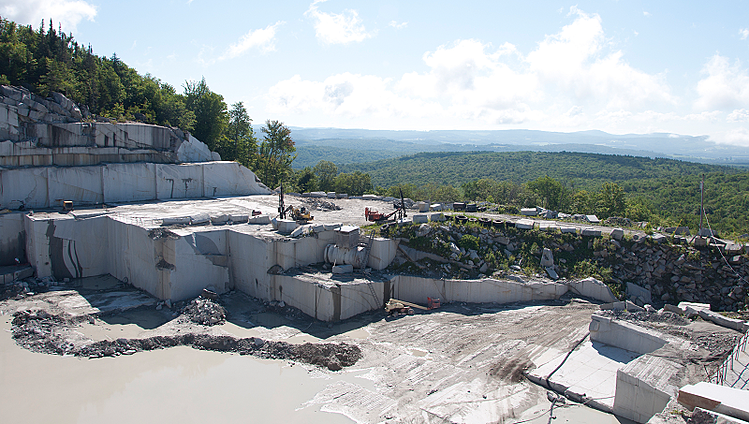 Quarried in the town of Woodbury, Vermont, Woodbury Gray granite, one of several granite types offered at Swenson Granite Works, has brought timeless style to buildings across the country for over a century. 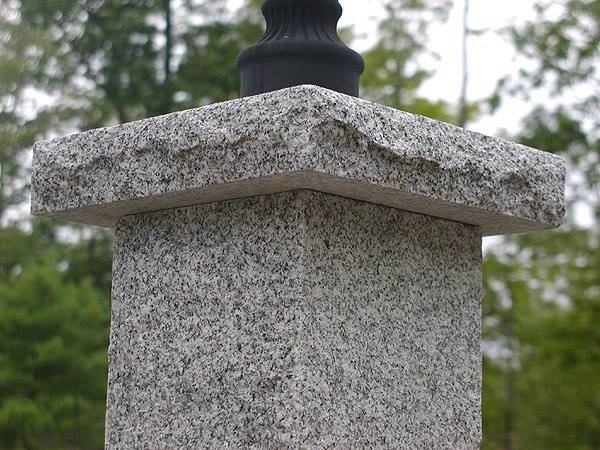 Woodbury Gray is recognizable by its distinct light gray, salt and pepper color. 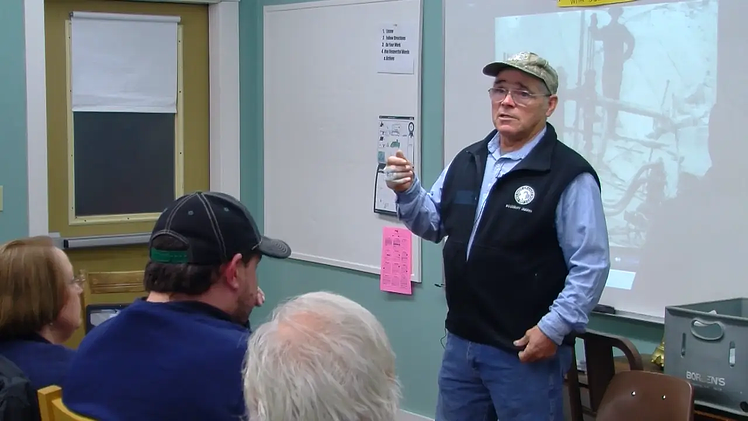 Rise of the Vermont Granite Industry

In the 1800s, Vermont’s early settlers discovered deposits of granite in the ground and started using the stone as a building material. Soon, granite gained popularity across the country and the state’s stone industry grew rapidly.

“Early quarrying tools were crude and the work was laborious,” says the Vermont Department of Tourism and Marketing. “A star drill--a metal rod with a pointed end looking like four joined chisels—could be struck with a heavy sledge... to form a series of shallow holes to be filled with black powder and detonated.”

Another quarrying method took advantage of New England’s seasons to remove stone. Pieces of wood were soaked in water, then inserted into holes in the granite. In the winter, the wood would freeze and expand, leaving large cracks in the granite.

Weighing around 172 pounds per cubic foot, removing Woodbury Gray granite without modern machinery was no small feat. The 1870s introduced steam-powered drilling equipment, a powerful and efficient alternative to hand tools, leading to the rapid growth of Vermont’s granite industry.

The Beginning of the Woodbury Quarry

The Woodbury quarry was originally owned by E.R. Fletcher, who sold it to the Woodbury Granite Company in 1895, according to The Vermont Historical Society.

The Woodbury Granite Company was a partnership between John Holden and Charles Leonard. The quarry was small when they purchased it, without any surrounding railroads for transportation.

The quarry started to pick up production under their ownership, and “when a railroad connecting Woodbury to the finishing mills in Hardwick was built in 1897, things got even better,” explains the Vermont Department of Tourism and Marketing.

Since railroads were critical in transporting granite and quarrying materials, the railroad sparked a new era of production at the Woodbury quarry. In 1898, Holden appointed his son-in-law, George Bickford, as general manager of the Woodbury Granite Company to lead production and expansion efforts. 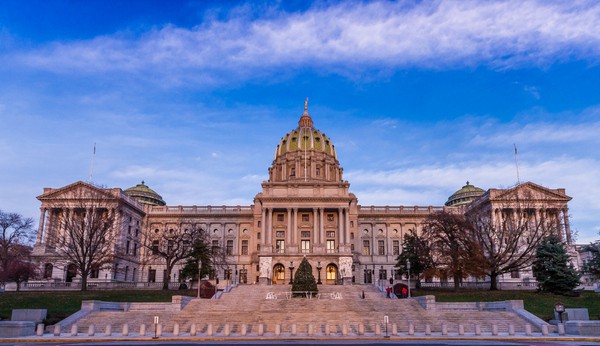 In 1903, the Woodbury Granite Company agreed to supply granite for the Pennsylvania State Capitol in Harrisburg, the largest building granite contract ever offered at the time. According to the Vermont Historical Society, “The company was...obliged to produce 400,000 cubic feet of granite, quarried, cut, delivered, and set in place in two years, a requirement that was regarded by the industry as impossible to meet.”

Under the management of Holden and Bickford, this difficult project was completed successfully. “(The Pennsylvania project) was really what made the Woodbury Granite Company,” adds Patoine.

The early 1900’s marked a period of significant growth in production of Woodbury Gray granite. Under Bickford’s leadership, the quarry provided granite for projects across the U.S., from office buildings and mausoleums to schools and public memorials.

In addition to the Pennsylvania capitol, Woodbury Gray granite was featured in other buildings like the Iowa State Capitol, Syracuse University Library, and hundreds of banks and post offices across the country.

The 1909 Sweet’s Indexed Catalogue of Building Construction details the many notable projects using Woodbury Gray granite at that time.

Production Slows at the Woodbury Quarry

In the midst of the company’s growth, George Bickford passed away in 1914 due to a burst appendix. A well-respected manager, his passing marked a tragic day for the business and his employees.

Like most businesses at the time, the Woodbury quarry was also significantly impacted by the Great Depression.

“The quarry shut down in the 1930s when the Depression hit,” explains Patoine. “The old rail trails that used to go up to the quarry were also discontinued, and the granite industry nearly stopped.” 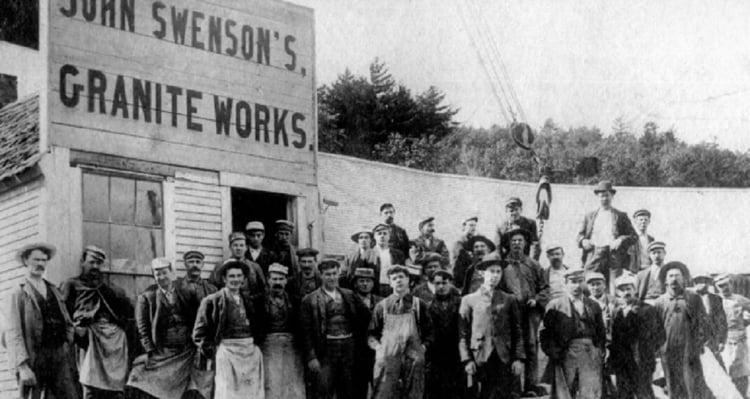 “Then Mr. Swenson bought the Woodbury quarry in 1953 or 54’,” says Patoine.“He had a vision that Pennsylvania’s capitol was going to need an annex.” In 1967, his vision became a reality when the state of Pennsylvania asked Swenson Granite Works to supply a large quantity of Woodbury Gray granite for an addition on the capitol building. This project launched Swenson’s success over the next few decades.

Patoine recalls the retail stores caused a rapid growth in the granite industry in the 1990s. “We started putting out 100,000 cubic feet per year, and that wasn’t enough--we had to bump up the permit to 250,000 a year,” says Patoine. Today, the Woodbury quarry produces about 500,000 cubic feet per year. “In the last 4 years, this quarry has become one of the highest-producing quarries in the U.S.” 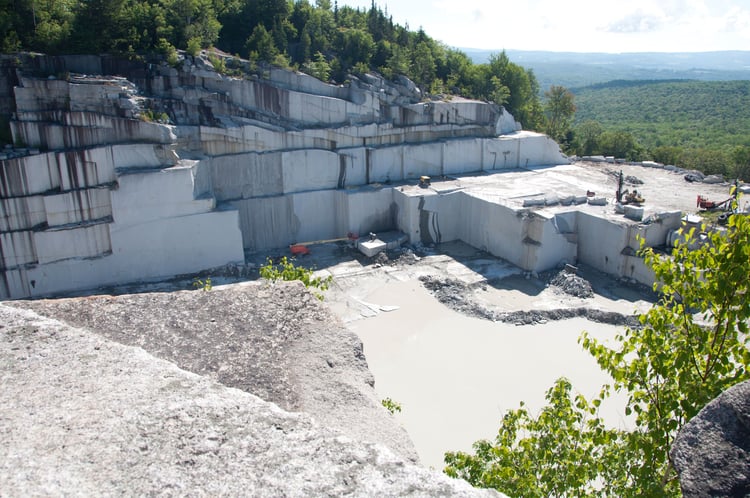 The Woodbury quarry is one of the highest-producing quarries in the country today.

Unlike the handheld tools used in early extraction, today’s quarries use large, industrial drills. Water bags and air bags, which are used to push broken wall away from the rockbed, are another modern invention.

“A water bag is a metal bag that is hooked up to a pressure washer, and then the bag expands in width. It will push 350 tons,” explains Patoine. Air bags are similar to water bags, but they are attached to air compressors instead of pressure washers.

“Before the wall is pushed over, a bed of crushed rock is placed on the ground where it will land,” says Patoine. Then, quarry workers cut clean blocks out of the large chunk of fallen rock using drills, wedges and shims.

Workers load the cut pieces of Woodbury Gray granite on trucks so they can be transported to the Swenson production facilities to be further cut and finished. 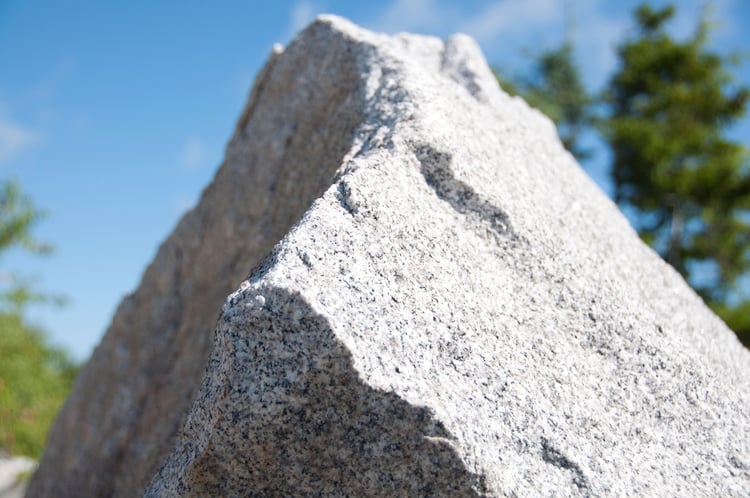 After the block is cut at the facility, the finishing process begins. Slabs are sent to different stations depending on the finishing type. In a process called “thermalling”, a high-temperature flame is used to treat the granite, creating a non-slip surface for steps. With “rock-facing”, stone workers use a hammer and chisel on the surface of the slab to create a bold, heavy relief along the edge. “Split-facing”, the most common edge finish, uses hydraulic pressure to split a slab on an even line. 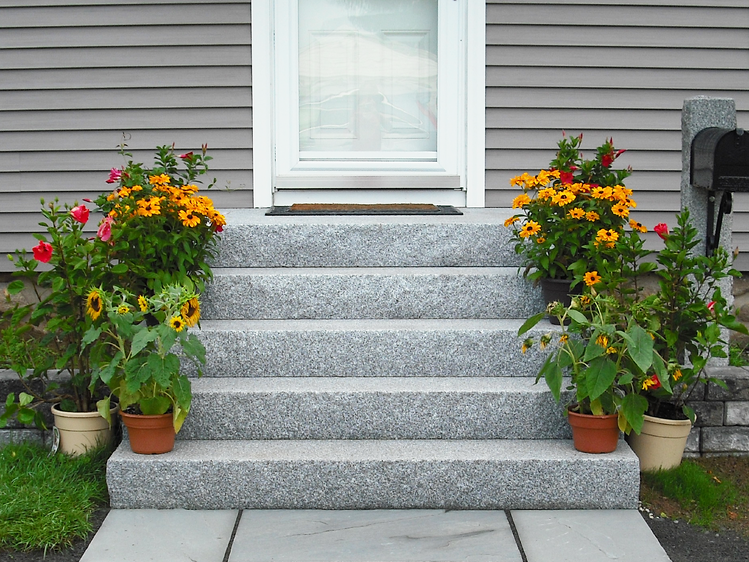 Woodbury Gray granite is shipped to Swenson Granite Works’ nine retail locations where it is used for residential, commercial and public projects throughout New England.