Long Live The Queen: A Queen Anne Victorian Is Restored 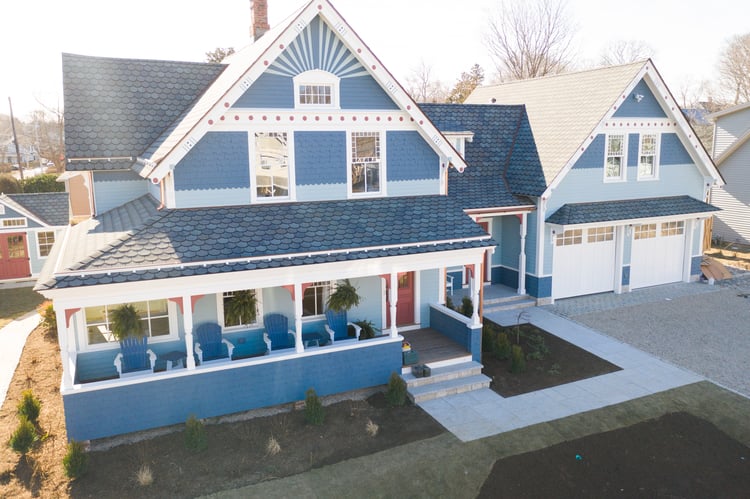 Narragansett, Rhode Island was first surging in popularity as a summer resort town in 1887 when a Queen Anne Victorian home was built at the corner of Narragansett Avenue and Robinson Street. With stained-glass windows, ornate bargeboards, and a charming assortment of shingle styles, it was a turn-of-the-century dream home. Flash forward 130+ years and the once stately Victorian still stands in the Pier neighborhood of the quaint seaside town, but the exterior was weathered, the interior structurally deficient, and the home sat on its corner lot, vacant and abandoned. 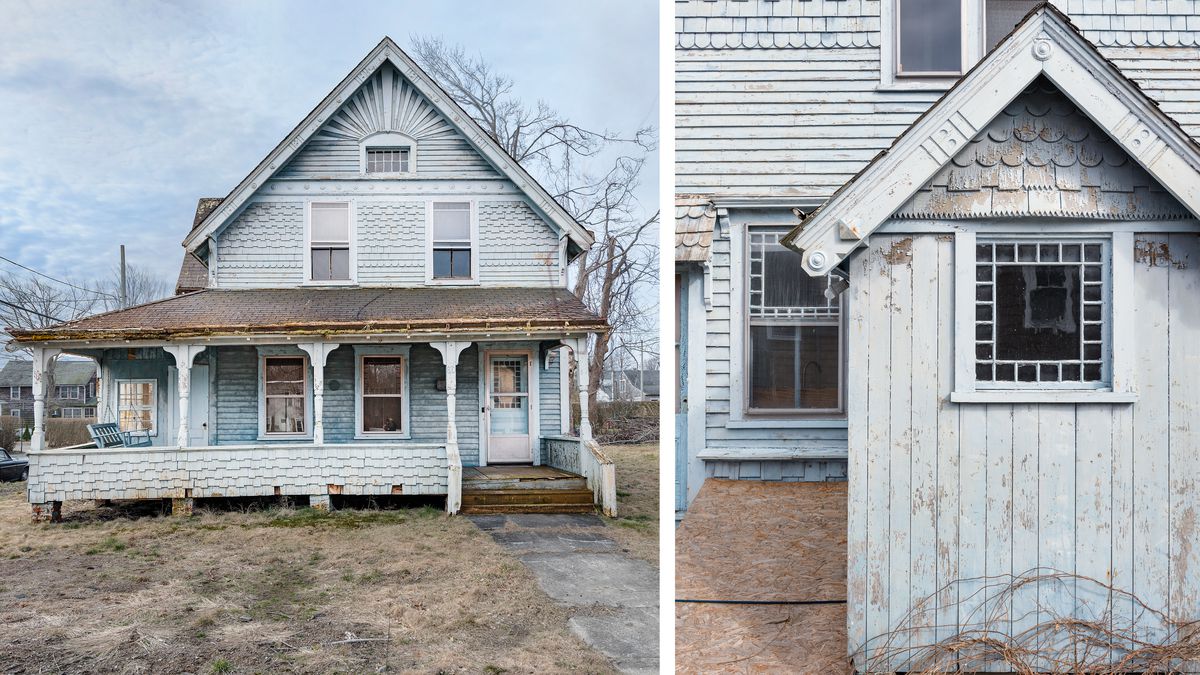 Over the years, the 1,700 square foot home went from dream to a diamond in the rough. Rehabbing a home like this is the kind of complicated, detailed and exacting work—built on maintaining as much historic architectural value and charm as possible—that scares away homeowners and contractors alike. But the new owners, the Campopiano family of nearby Cranston, saw the potential of this home steps from the beach, and have partnered with skilled craftsmen and businesses across the country to restore it to dream home status. The project is featured as the “Seaside Victorian Cottage” on the 42nd season of This Old House TV.

John Machunis, vice president of sales for Polycor—the parent company of Swenson Granite Works—is a Cumberland, Rhode Island native who attended college in Narragansett. In fact, he lived a few houses away from the project house while attending The University of Rhode Island. Getting to step foot back inside a house he had partied in during his university years was a full circle moment. 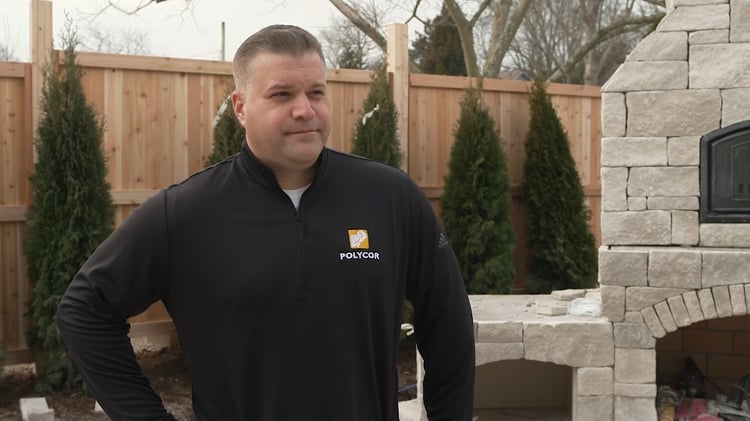 “I got into this business by working my way through college at a construction company doing hardscapes and masonry,” said Machunis. “I actually got to work on a lot of homes in that neighborhood.”

Taking on a historic renovation project requires skilled hands all around. While the inside could be opened up and gutted, meticulous exterior work would focus on historic preservation done with surgical precision in order to satisfy the Narragansett Historic District Commission’s guidelines for historic renovation.

“There's definitely a uniqueness to the architecture there,” said Machunis. “And the nice part is, even with a lot of the new construction going on, they try to hold that look.”

A new 800 square-foot addition—featuring a two-car garage and mudroom on the first floor, and master suite on the second floor—was designed to fit into the area. And it had to also meet the historic district Commission’s rules for complementing but not overpowering the existing structure. 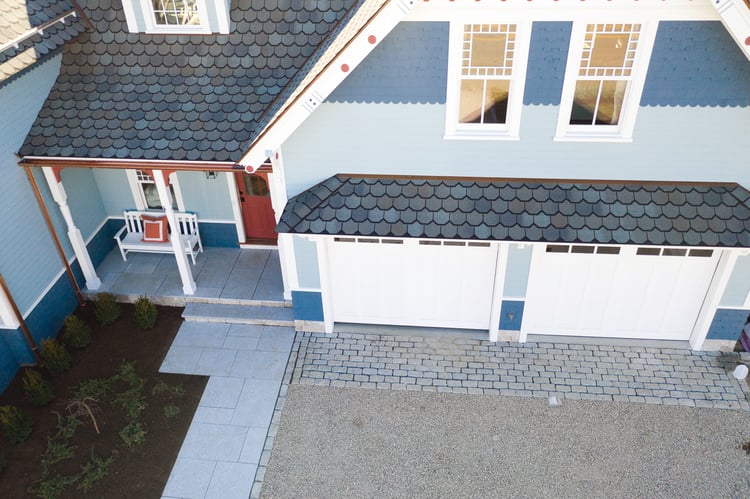 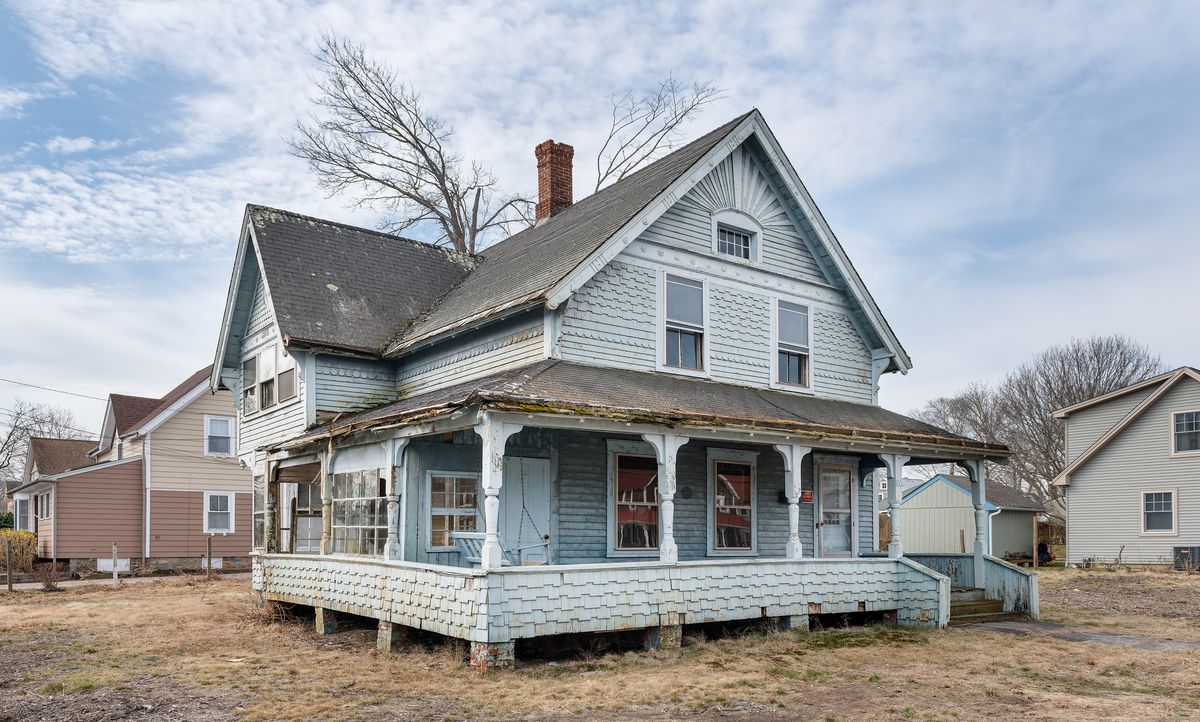 The choices made when preserving and rehabbing a historic home can help keep history alive. Sweenor Builders, a full design build firm, led the restoration, carefully revitalizing the home with careful craftsmanship, rehabilitating and preserving existing materials while also choosing new materials that reflect the home’s age and character. 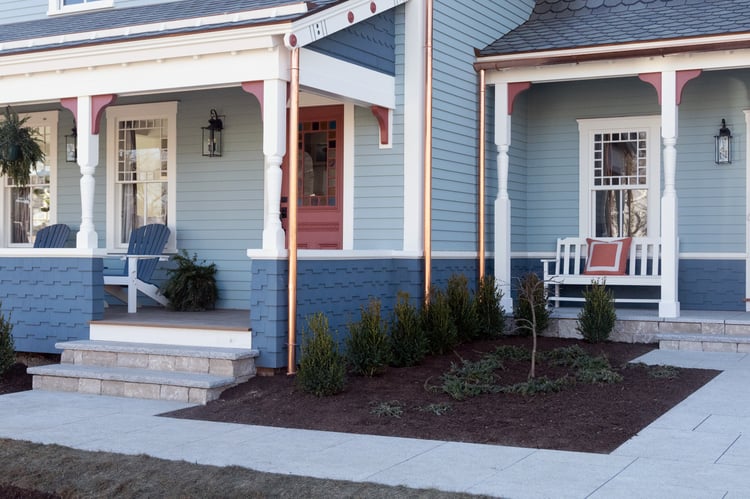 And it’s not just the building itself: the hardscape also had a large—and historically appropriate part—to play in this renovation. By using natural stone, the team was able to modernize the space while still maintaining the charm and history of the home. The completely reconcepted backyard area features INDIANA LIMESTONE - FULL COLOR BLEND™ pavers, slabs and veneer.

This product, and all others used on this project, can be purchased through your local Swenson Granite Works retail location. 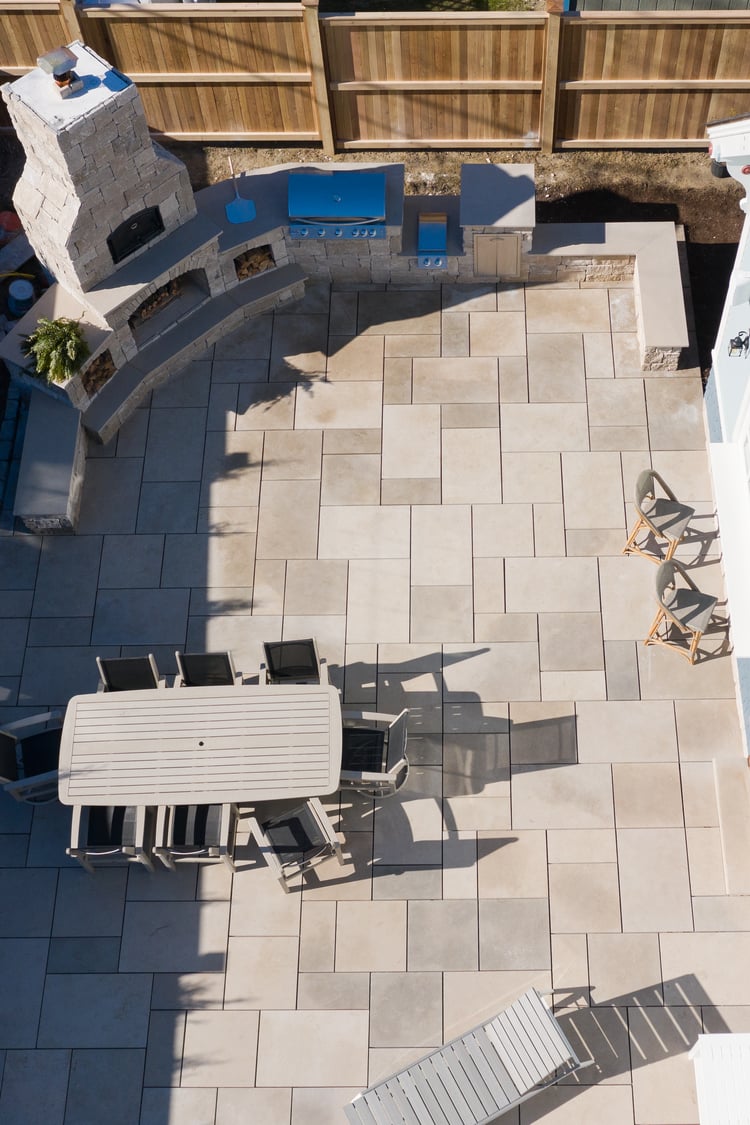 “Obviously the limestone has insulation properties, and knowing that it wouldn't be too hot on your feet in the summer—and they're always going to be on bare feet out there by the pool—was a plus, but I chose the limestone because of its neutral palette against all that color,” said Martone. “And the limestone also just reminds me of the sand at the beach.”

Quarried out of southern Indiana, the same stone is prominently featured in one of the most famous buildings in Rhode Island, The Breakers Mansion in Newport shore. The Breakers was built around the same time as the Seaside Victorian Cottage, making the limestone, known for its uniformity and consistency, a historically appropriate fit. 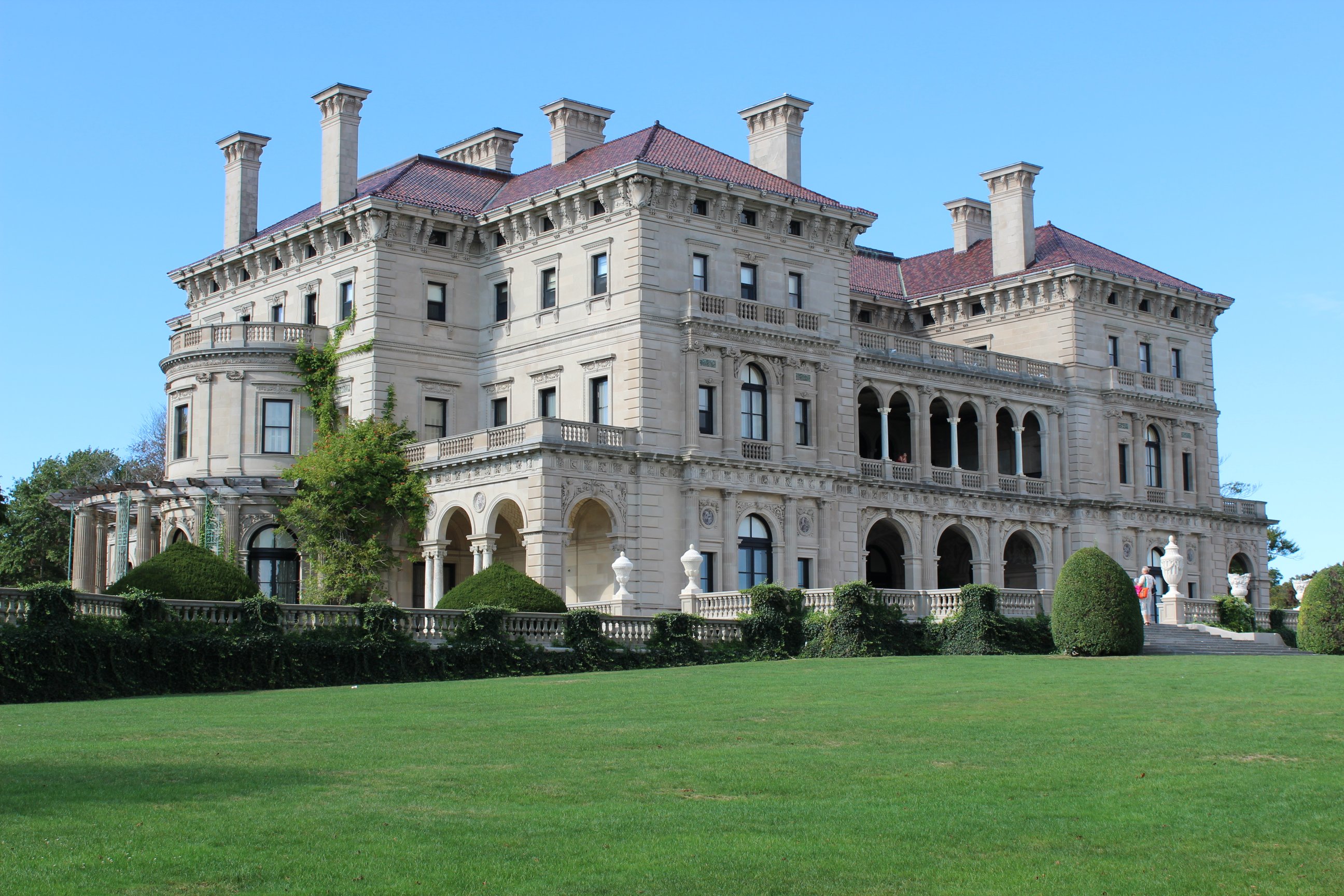 In nearby Newport, history is on full display at the Vanderbilt's summer home, appropriately dubbed 'The Breakers', entirely constructed of Indiana Limestone.

“Rhode Island is a very small community and it’s very proud of its history,” said Machunis. “And to be able to talk about the stone that built the Breakers and the Rhode Island State House and how that applies to this particular job, that was exciting. People that I knew in the state were really interested in seeing how all of it came together.” 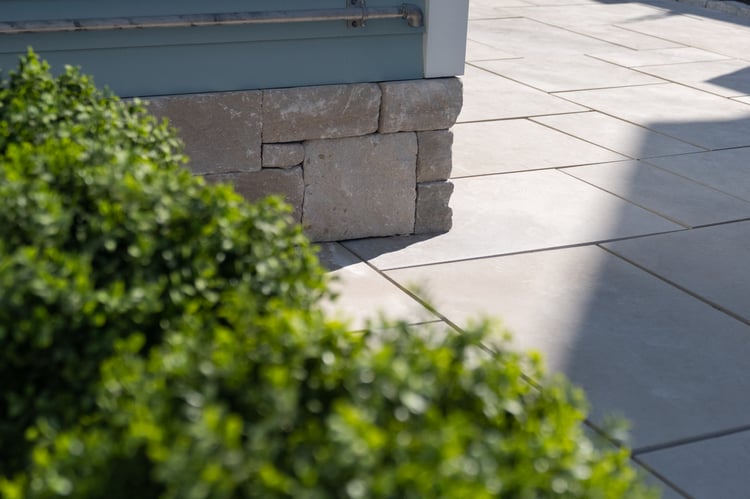 Early on in the design process, the homeowner made it clear that while the home renovation and restoration was obviously important, the backyard space was just as integral to their future enjoyment of the space.

“They wanted to have that multi-use outdoor living environment,” said Machunis. “Discussions went from a barbecue to a charcoal grill to a fireplace. Our idea was to step it up another level and truly make this a custom project, so we went with the pizza oven.” 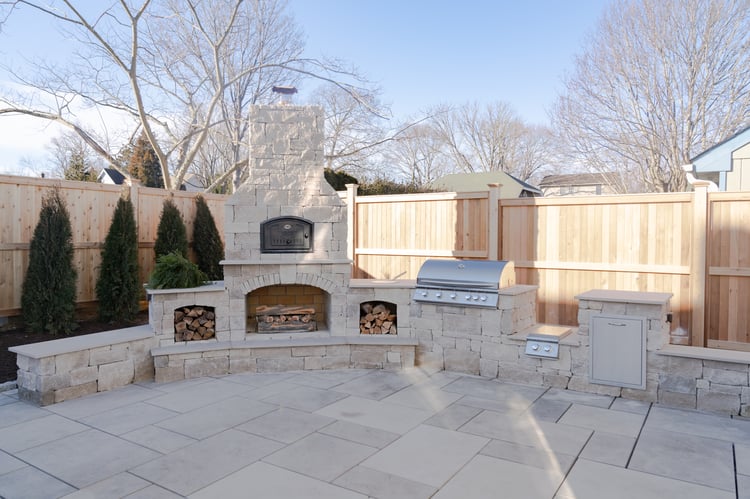 The prefabricated fireplace and brick pizza oven combination by Round Grove Products is the show piece of the new outdoor kitchen. The one-ton unit was built in sections in Ohio and trucked to the Rhode Island site where it was clad in INDIANA LIMESTONE - FULL COLOR BLEND™ Rockford Estate Blend® split and tumbled sawn thin veneer.

In just a matter of days, mason Mark McCullough and his crew cut and placed the one inch veneer and custom fit it to create elegant archways and features on the fireboxes and the fireplace. The thin stone veneer allowed the masonry crew to make a lot of progress in a short amount of time for an ultimately fast installation.

“Having an outdoor natural stone pizza oven with that kind of a look, done in a matter of just a couple of days, is really remarkable,” said Machunis.

The small backyard space is big on amenities, including an extensive outdoor kitchen featuring Indiana Limestone Full Color Blend slabs for the countertops and a prefabricated Soake pool with Indiana Limestone pool coping.

The limestone was used throughout the backyard space—and into the front—to create a cohesive look. The same limestone thin veneer was applied to finish the foundation of the house and on the risers of the front and back steps. The front of the home further took shape with gray granite cobblestones, pavers and stair treads. 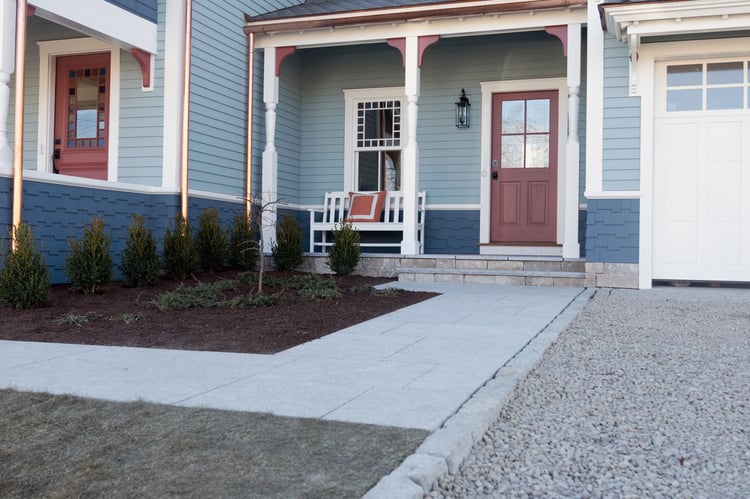 “This granite, from a local quarry in Vermont, is one of the strongest substances that you can possibly use for a hardscape feature,” said Machunis. “And certainly it can withstand the elements of New England. We see it out in front of many New England homes, and, whether it's cobblestone or pavers or treads, they're meant to last forever.”

Two granite cobblestone driveway aprons, one at the curb and the second just outside of the garage, flank a crushed aggregate mixture of pea stone and gravel for the driveway, while more granite cobblestones edge the walkways. The imperfect edges of the cobblestones give the space, while all-new, the historic look needed to fit in with the rest of the house. 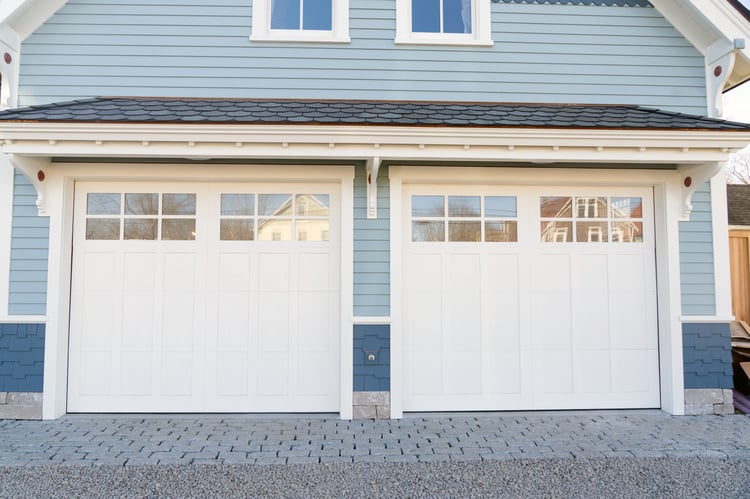 “The cobblestones in the front yard really blended with the two blue tones that we used on the house, which were inspired by its proximity to the ocean,” said Martone. The gray granite continues through walkway slab pavers and stair treads up to the front door.

As the project nears completion, all of the details and decisions that were taken to restore the home to glory have added up, taking the formerly abandoned home back to dream home status.

“It’s a really nice transformation from what they started with to what they ended up with,” said Machunis. “It really blew my mind, not just the exterior portion, but also the amount of work it all took. They recreated what that house probably would have looked like 100 years ago.”

Download the case study to see more of how the choices made when preserving and rehabbing this historic home help keep its history alive.