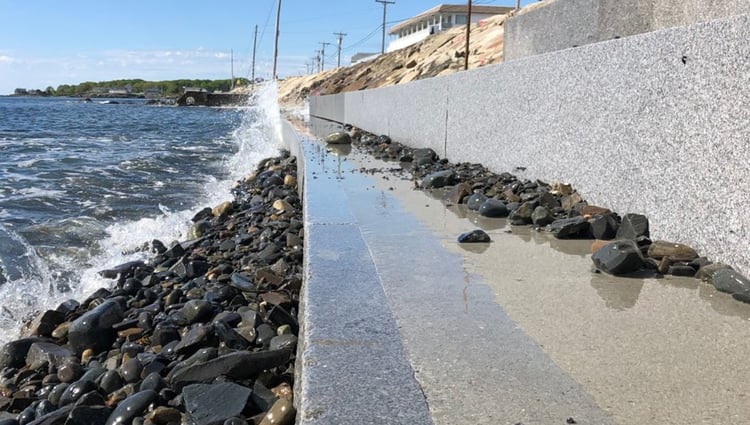 According to Don Murray, Chief Engineer with Swenson Granite Works, granite has long been the stone of choice for seaside projects up and down the New England seaboard. He explained that granite is more resistant to “salt attack” than concrete and is a very stable material, which is why it’s been the go-to material for piers, seawalls and jetties for years. “It’s not like the stone is going away any time soon,” he said of granite’s durable nature.

The designers of these three very different seaside projects chose granite to stand up to everything Mother Nature has to dish out, year after year.

AN OCEANFRONT SEATING AREA FOR THE AGES 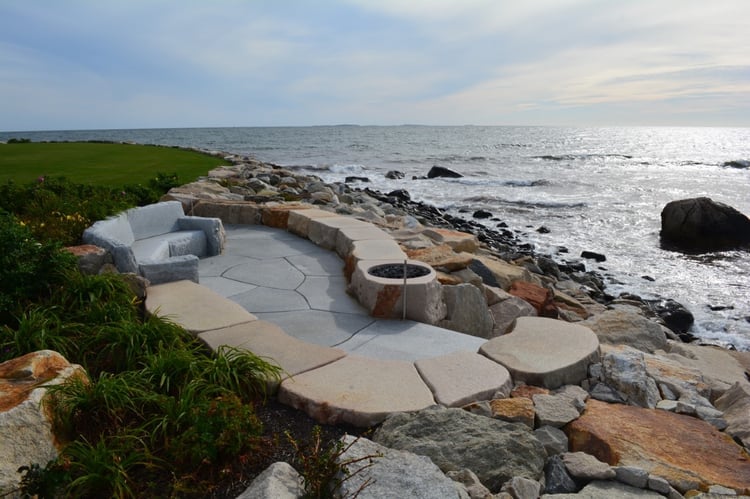 For a terraced seating area tucked along a rocky New Hampshire bluff with sprawling ocean views, designers chose WOODBURY GRAY™ granite for the staircase, custom patio pavers and couch elements. The two granite terraces are connected by a winding stone staircase and feature seating fashioned from granite on both levels and a fire pit feature to help set the mood while watching the waves as the sun sets.

The seating area was part of a large-scale new home construction and hardscaping project that aimed to recreate the feel of the graceful seashore residence it replaced along the coast in Rye Beach, NH. According to Ryan Grover, owner of Great Works Landscape — the firm that executed the hardscaping — the project took about 18 months to complete and found the crew living on the property in the old homestead that was torn down once the landscape portion of the job had been completed. 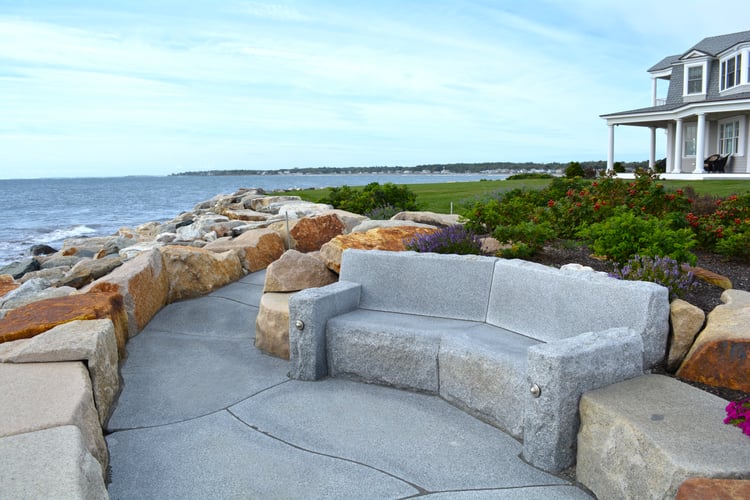 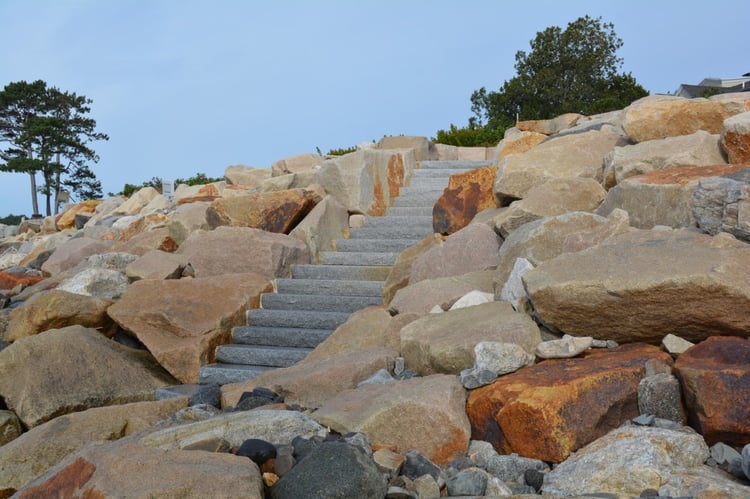 “At times it was absolutely wild,” said Grover, of trying to work around an ocean tide that rose on average nine feet and storm surges that could rise as much as 20 feet. “But it was also absolutely beautiful to be working on the New Hampshire coast.”

Woodbury Gray granite is native to New England and its local reputation was part of the appeal of working with the stone, said Grover. The timeless granite with distinct light gray, salt and pepper color is also extremely durable, he said, as it doesn’t react to sun or fading. In fact, since the job was completed in 2013, Grover has inspected the property multiple times and said even after exposure to constant tidal and storm surges, the stone is “basically unchanged.”

Another desirable feature that makes Woodbury Gray granite one of Grover’s top choices is its lack of iron veining, which would result in a lot of rusting over time from exposure to the ocean. The stone’s consistency of grain makes it a very workable and predictable material to work with as well. They also used a thermal finish that provided a non-slip surface.

“It’s just a great rock and once it’s in, it’s permanent,” he said, which is one of the reasons why he tends to work predominantly with natural stone for all of his hardscape projects. “I find that the investment a homeowner would make in buying natural stone is redeemable in equity,” he said. “It makes more sense to buy something of quality than something more economical but that will not last as long and adds no value to the home.”

While challenges included dealing with the changing New England weather and tides as well as fitting 6,000-pound slabs to create the seating area, Grover said the job was a memorable one. “The stars just aligned: we had a wonderful designer, some of the best stone masons in New England and got to work with materials that were just fantastic,” he said. “It all came together very nicely.”

A PIER THAT WILL LAST A LIFETIME 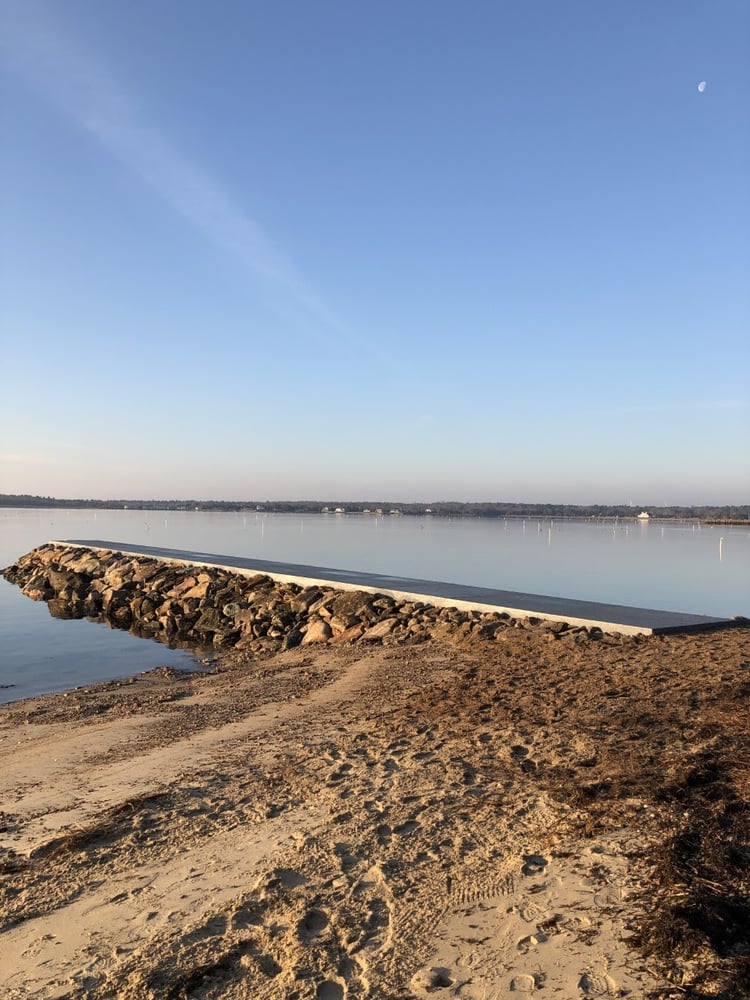 While granite might not be the first material you’d think of when designing a pier, Tim Briggs of CF Briggs Marine Construction in Marion, Massachusetts, said he is “passionate” about natural stone and tries to use it for most of the projects he works on. “I’m a natural stone guy, the granite is natural and it’s great to work with,” he explained, noting that piers built by “old timers” years ago still stand. “It’s timeless,” he said. A smooth stone pier jutting out into Buzzards Bay off Mattapoisett, Massachusetts called for seven-ton blocks of custom sawn granite that were inserted deep in the ground. The project was helmed by Tim Briggs, third generation of the family owned marine construction company, who specialize in seawalls, docks and erosion control. 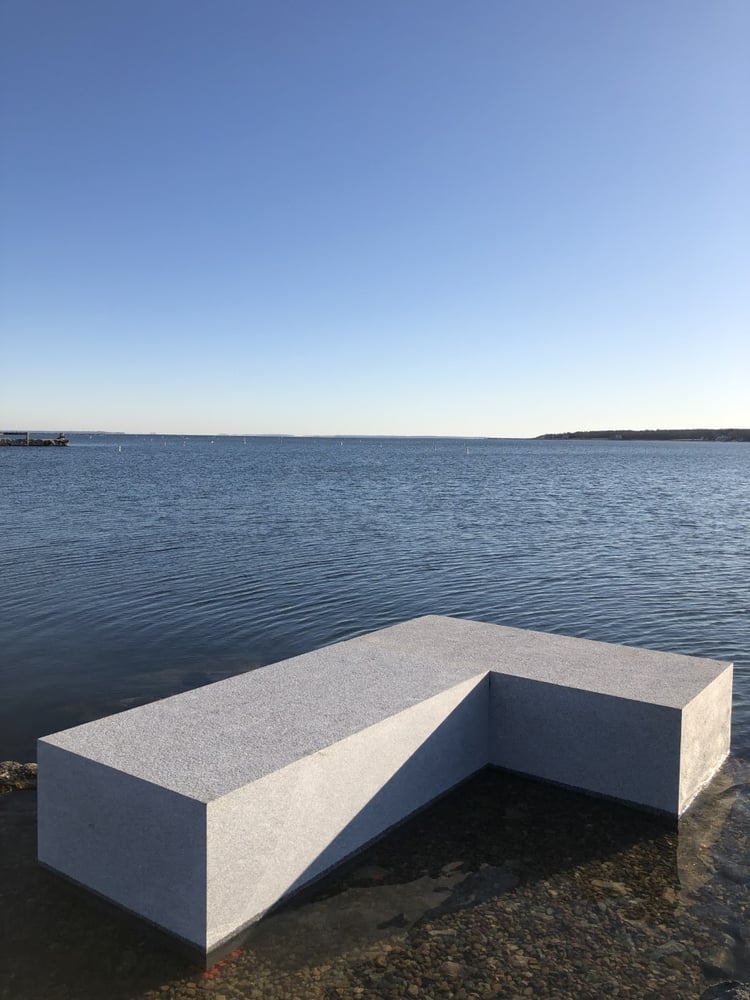 Woodbury Gray granite was a natural choice for the project, not just for its durability in a harsh environment, but also because Swenson Granite Works owns their own quarries, they have the equipment to cut the blocks to size, and the capabilities and suitability for the application. With the right equipment and experience from quarriers, you’ll come away with a good solution.

The installation called for the leveling of an existing trap rock base and then the blocks were lowered by cranes using a vacuum system, which Briggs said was a “timesaver” compared to using straps and chains. 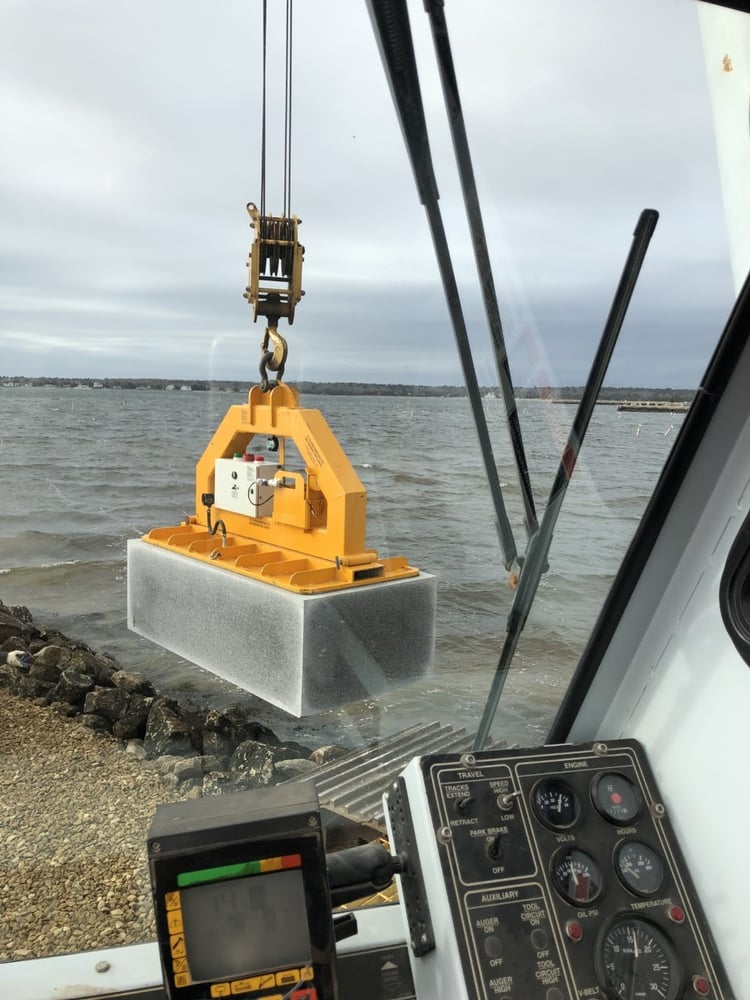 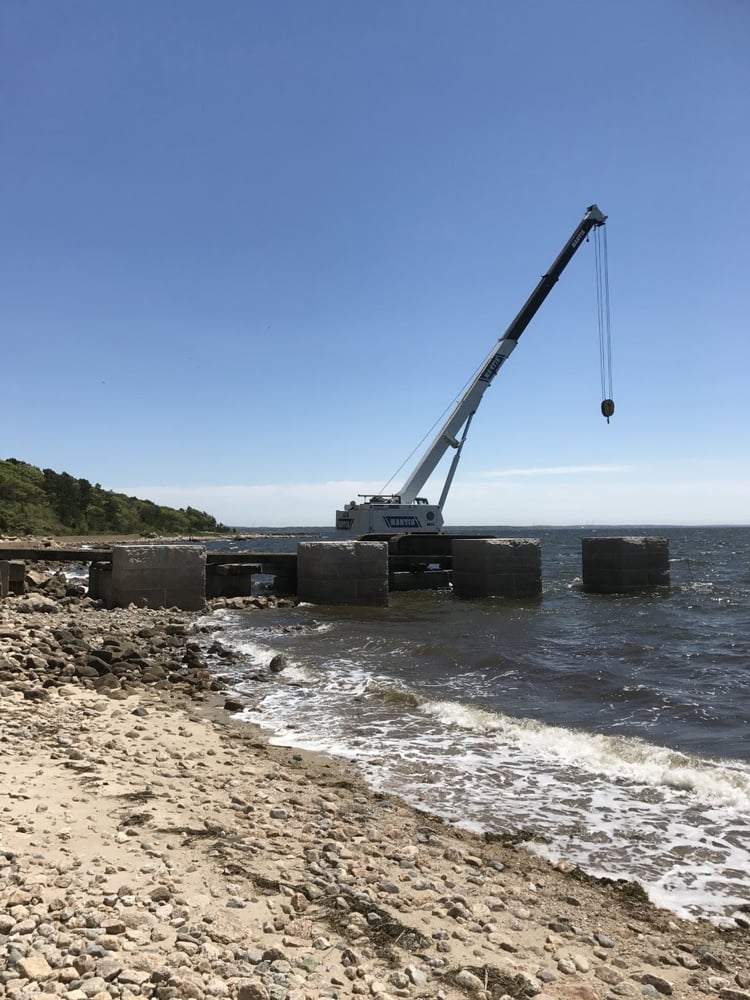 “Even though the blocks were quite heavy, having them suspended in mid-air allowed you to just touch them and they would do what you want them to do,” he said, adding that the job could have been done by barge but would have required taking the weather into consideration along with the tides.

The blocks had a smooth finish on their sides, allowing for a tight fit, while the community pier's top was thermaled for a non-slip finish, due to the amount of foot traffic. This also makes it easier for the public to launch kayaks, and there is also a gangway with anchored float.

Briggs worked with the Swenson Granite Works Hanover, Massachusetts store and said it helped make the job seamless because he had someone he could just call up and give him a quote, and when the material arrived it was cut straight and he “didn’t have to mess with it.”

A SEAWALL THAT DEFENDS THE COASTLINE 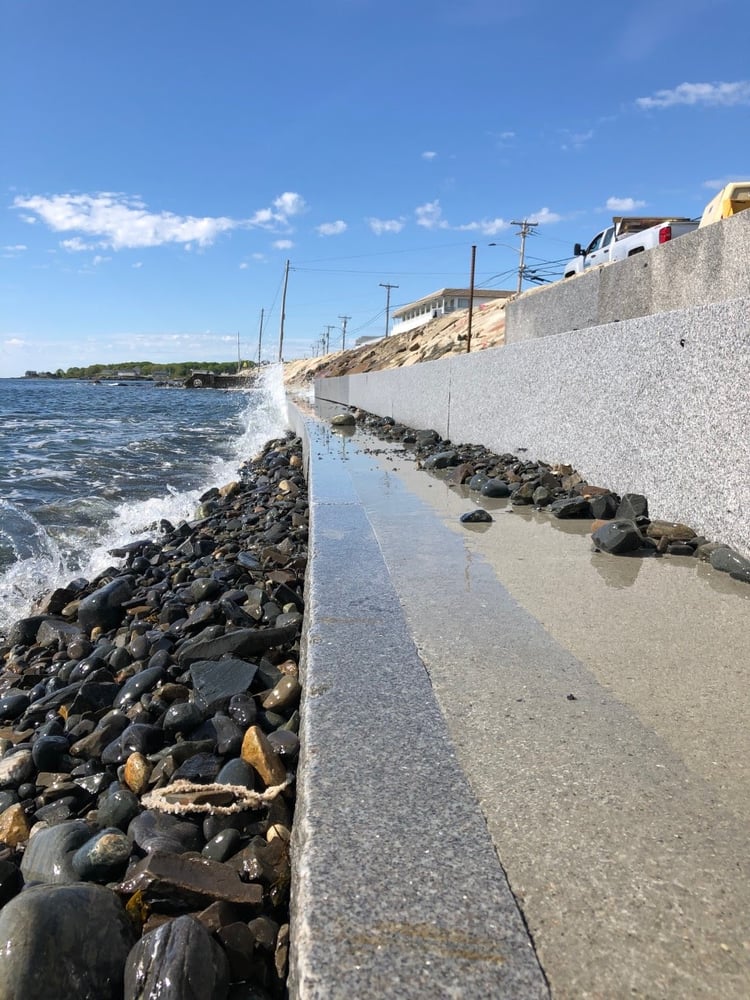 York, Maine is a popular tourist destination for beachgoers who flock to the town in the southern portion of the state for its long stretches of sand, amusement park and surf action. But the town is also a favorite bullseye for wicked nor’easter storms that pound the coast and wreak havoc with its seawalls.

Unlike other coastal New England towns, York doesn’t have any island masses offshore to help break up incoming swells, allowing the tides to roll in. York’s main road is elevated about 16 feet above the beach in many spots and relatively flat with little pitch, which allows the water to get pushed up towards the road at a large volume.

After four such nor’easters beat up York’s shoreline—which caused the road to settle and left chunks of sidewalk and old curbing on the ground—the town’s administrators decided it was time to shore up its seawall armor and came up with an out-of-the-box solution for rerouting dangerous wave energy.

The new seawall would be fortified by stepped granite slabs that would redirect wave energy from its usual route up the seawall and onto the road and instead feed the waves straight up the wall and back into the ocean. 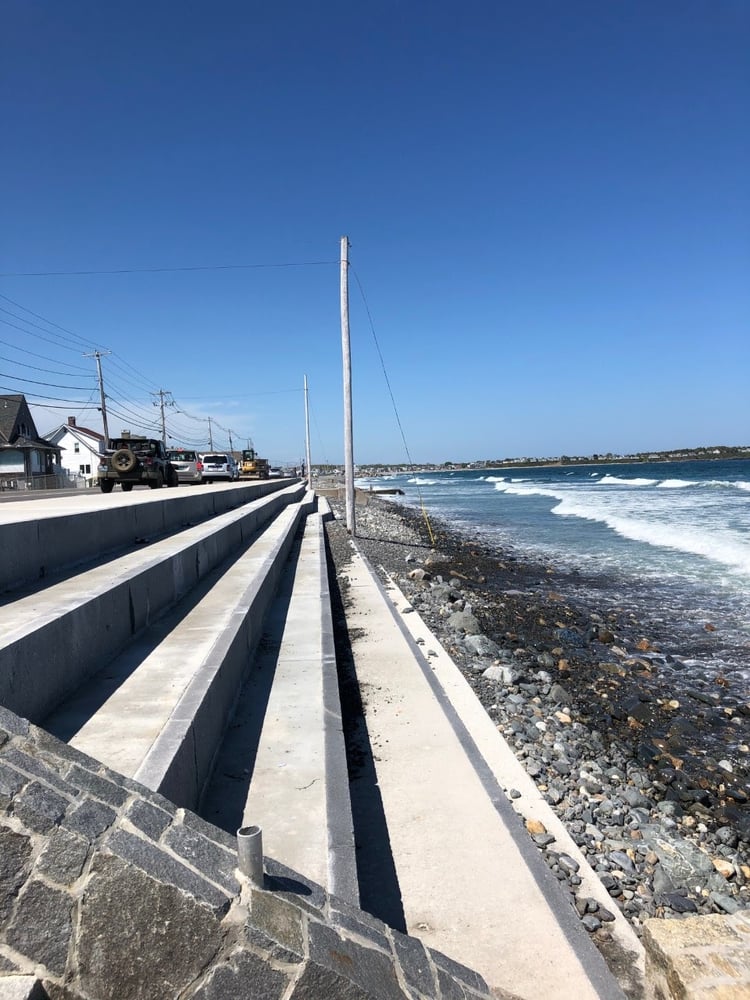 “It was a pretty novel idea,” said Chris LaBrecque, whose grandfather started the business. The project began in February 2018 and is ongoing as the crew has to work around the summer season tourists and inclement weather. He said the job has been a “pretty complex process” as the section of seawall is very tidal, allowing them on a good day to have a 12-hour window for work, depending on where on the clock those 12 hours fall.

LaBrecque’s team is currently installing CONCORD GRAY™ granite slabs that have been pre-drilled by Swenson Granite Works with holes that are set onto dowels, which fasten the steps to a three-foot thick concrete base that ties into the existing seawall. 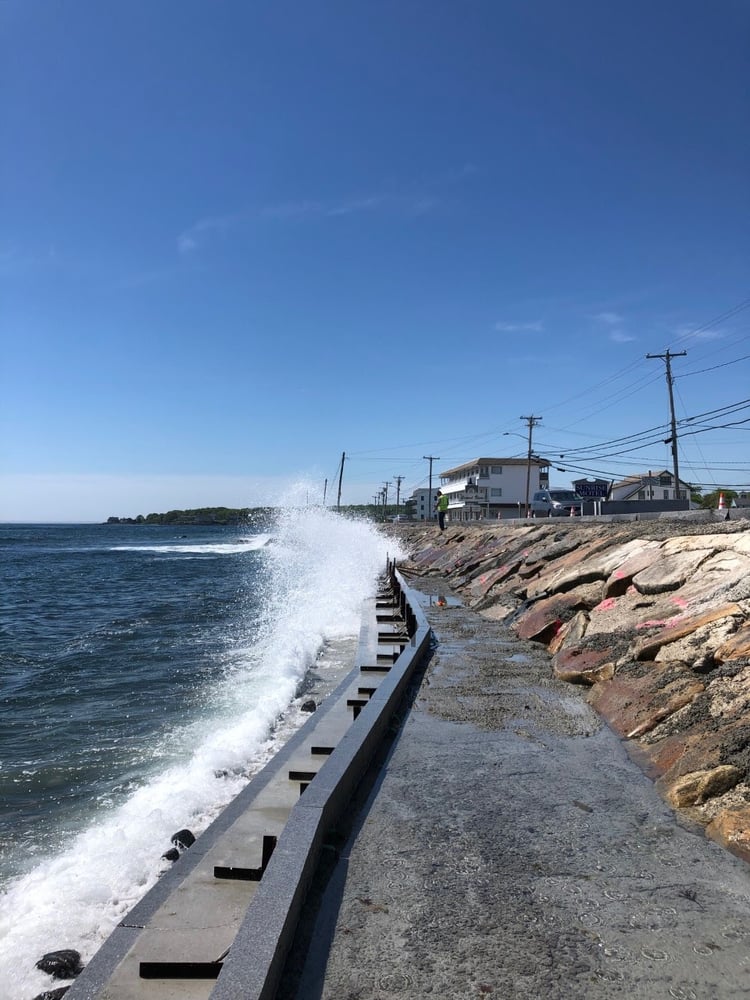 Designers chose Concord Gray granite, which is the same material LaBrecque Construction uses for curbing, as it has the strength and durability to stand up to pounding ocean waves better than concrete. “Also, it just looks a lot nicer,” he said. When it comes to building along the Northeast Coast, whether you’re reinforcing a seawall, building a community dock for boaters and kayakers or designing a dreamy oceanfront seating area with stunning ocean vistas, granite is the natural choice for providing the strength and durability needed to stand up to whatever Mother Nature’s got hidden up her sleeve.

Swenson Granite Works quarries and manufactures granite and stone products for both landscaping and building. Specializing in both large and small projects for residential and commercial applications. Request a quote for your next project.