Before and After: 6 New England Homes Get a Boost of Curb Appeal With Natural Stone Hardscaping 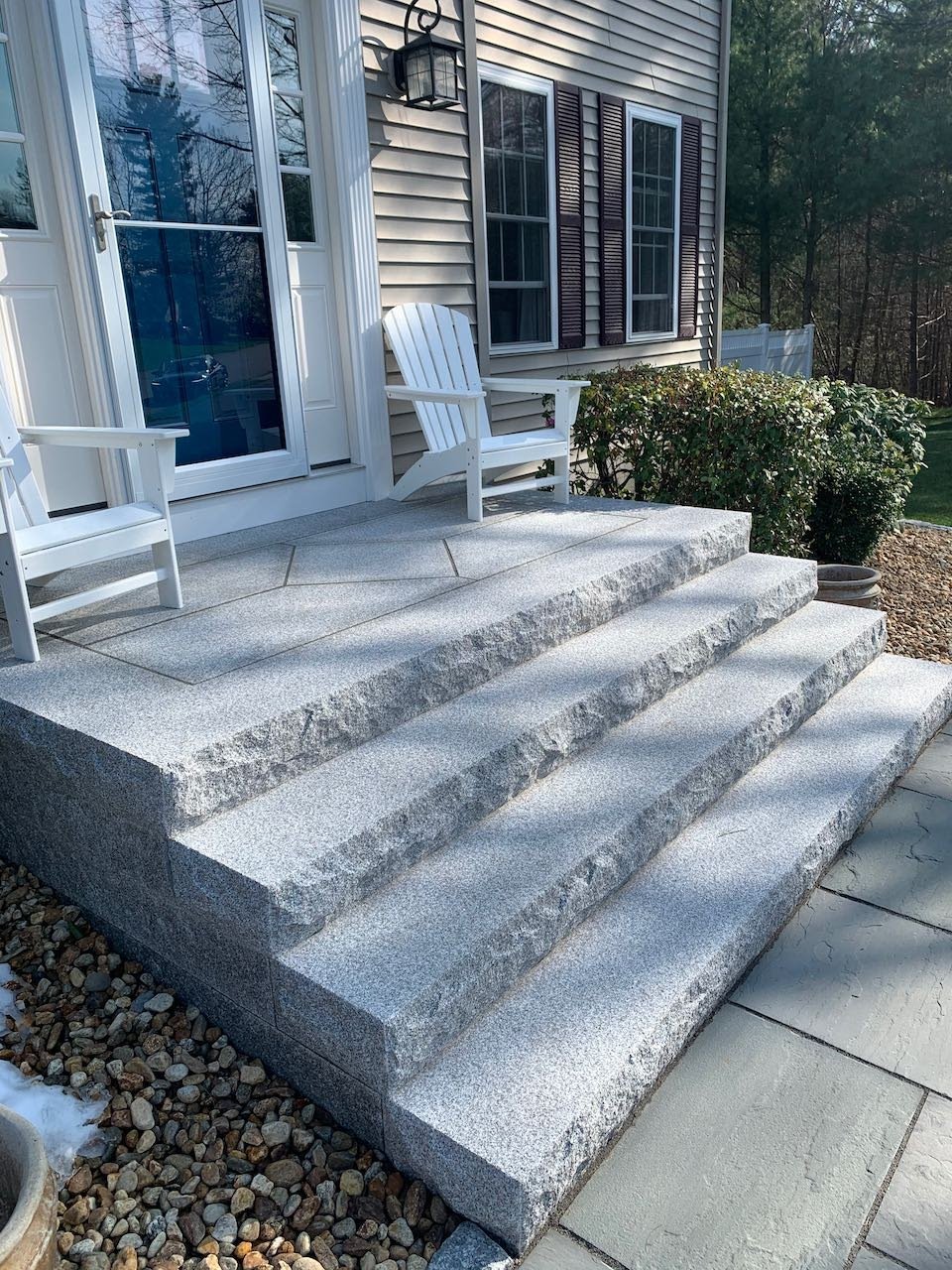 As most New Englanders are spending more time right at home these days, those projects that seemed to loom off in the future are getting checked off the list this summer. Adding a new walkway, patio or front steps are among some of the top requested curb appeal projects.

“Business has skyrocketed,” said Tom Kraus, owner of Natural Path Landscaping in Foxboro, Massachusetts, who said he is booked through the end of the fall. “People are spending more time at home and focusing on making their outdoor spaces more livable, which is exactly what we do.”

When the project calls for granite — and for Kraus, many of them do — he turns to Swenson Granite Works products to ensure each job gets the muscle and beauty of natural stone quarried in nearby Vermont. “We only install Swenson’s granite steps — there is no reason to go anywhere else.”

You can visit a Swenson Granite store near you and we will help you choose the right stone for your project.

For homeowners still on the fence as to whether they should move forward on a hardscape project they’ve been considering, Kraus says the decision is a no brainer. “What I always tell people is that the project doesn’t cost them anything,” he said. “You’re adding value to your home and if it’s a cost issue, you will definitely get your money back when you go to sell.”

He said he’s done work for people who were moving and had been told they needed to fix a walkway or steps for safety concerns. Once the job is finished, they wonder why they didn’t have the project done earlier so they could enjoy the upgrade themselves.

“If you do it correctly, using all the right materials, it’s going to last,” he said. “You might as well enjoy it for the five or six years before you sell your house.”

Here’s a look at six projects by Natural Path Landscaping that used granite and natural stone products to give each home a big boost of curb appeal.

These steps, constructed of wood and concrete, needed to be reset almost every year to prevent the wood from shifting and rotting. While the homeowner knew he wanted granite for the new steps, most of the contractors who bid on the job told him that he needed to use concrete or the steps would end up sliding down the hill.

But Kraus knew that WOODBURY GRAY™ granite with a split face would be the perfect material for the job and that they would just need to be installed properly. Some steps he took to ensure stability included designing the steps with a slight curve, adding at least six inches of crushed stone as a base and placing cobblestones to lock in the bottom step. With some fresh stone outcroppings and mulch added, the new steps are a handsome addition to this front yard. 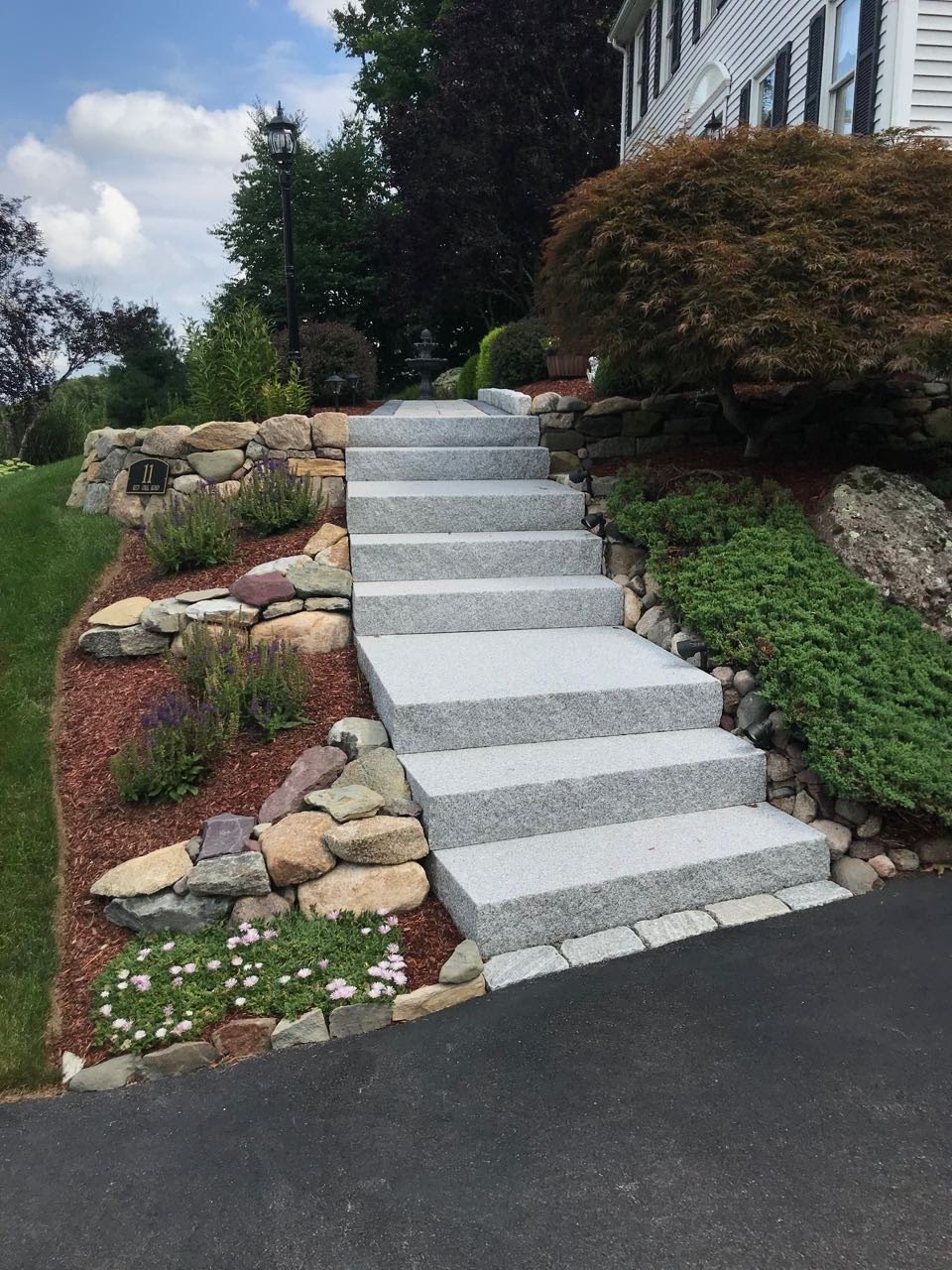 Revamping for Safety and Aesthetics

The decaying steps and pathway to this home had definitely seen better days before Kraus and his team worked their magic. The pathway was narrow and outdated, and both sets of steps were veering on hazardous for use.

New Woodbury Gray granite radius steps, an irregular bluestone walkway and graduated granite steps leading down to this home’s driveway completely transform a dated entryway. The half moon steps leading to the front door work well when paired with walkways that go off towards the side of the house, said Kraus. 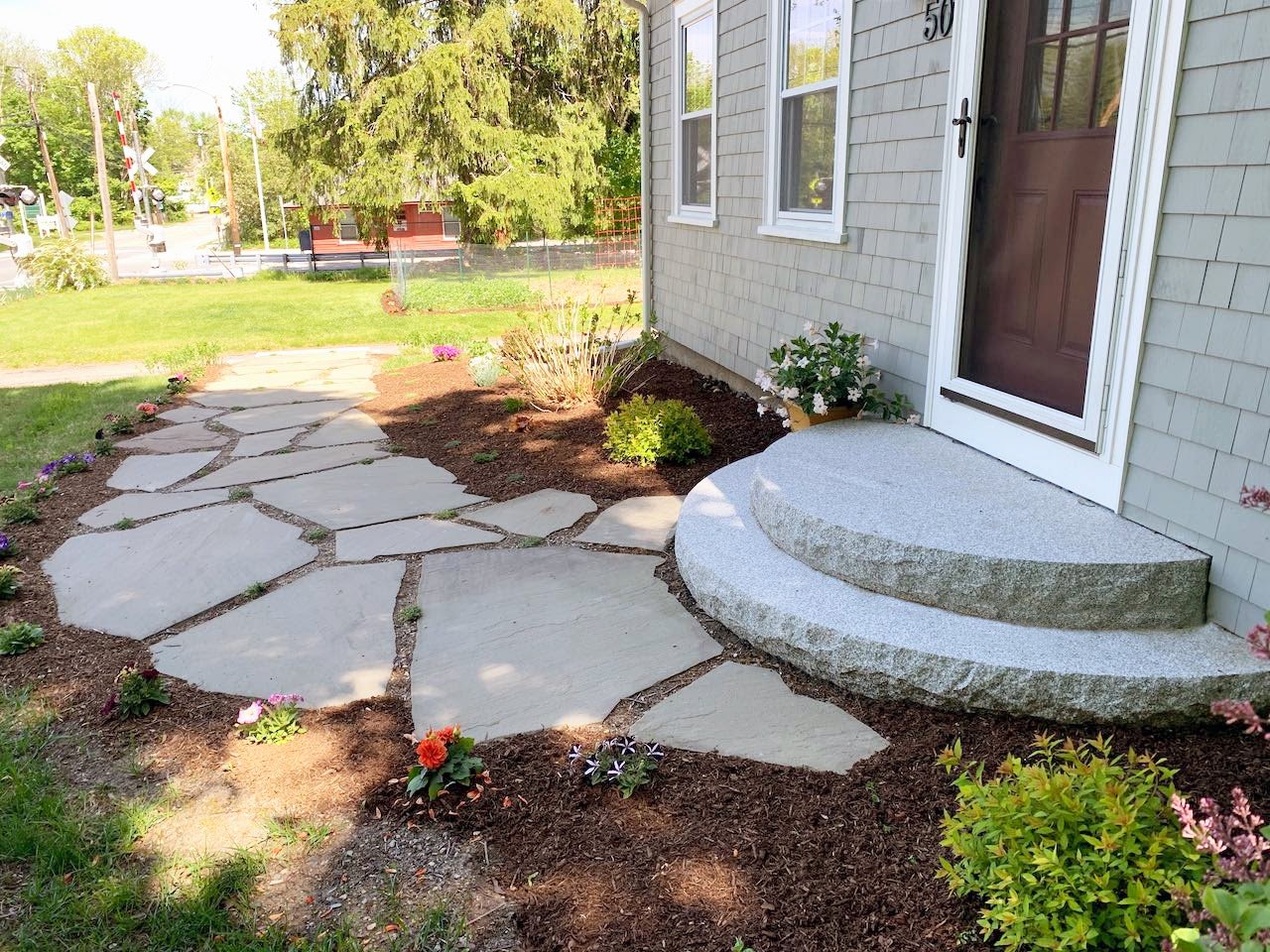 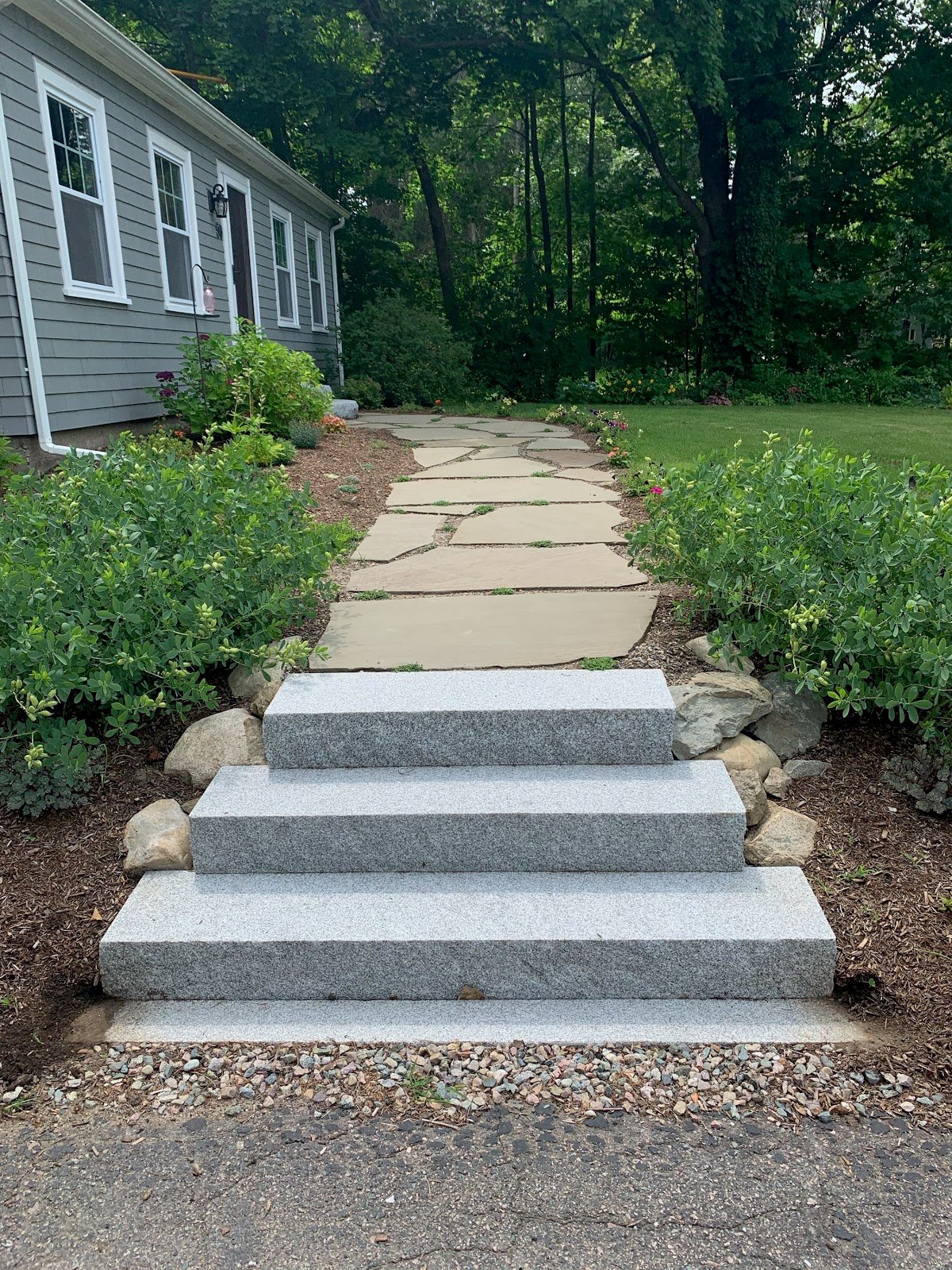 From Hazardous to Hallelujah

This long set of crumbling steps presented a number of challenges for Kraus and his team. The sidewalk it led down to was on a significant slope and using standard seven-inch slabs would have resulted in too many steps with no landing area. 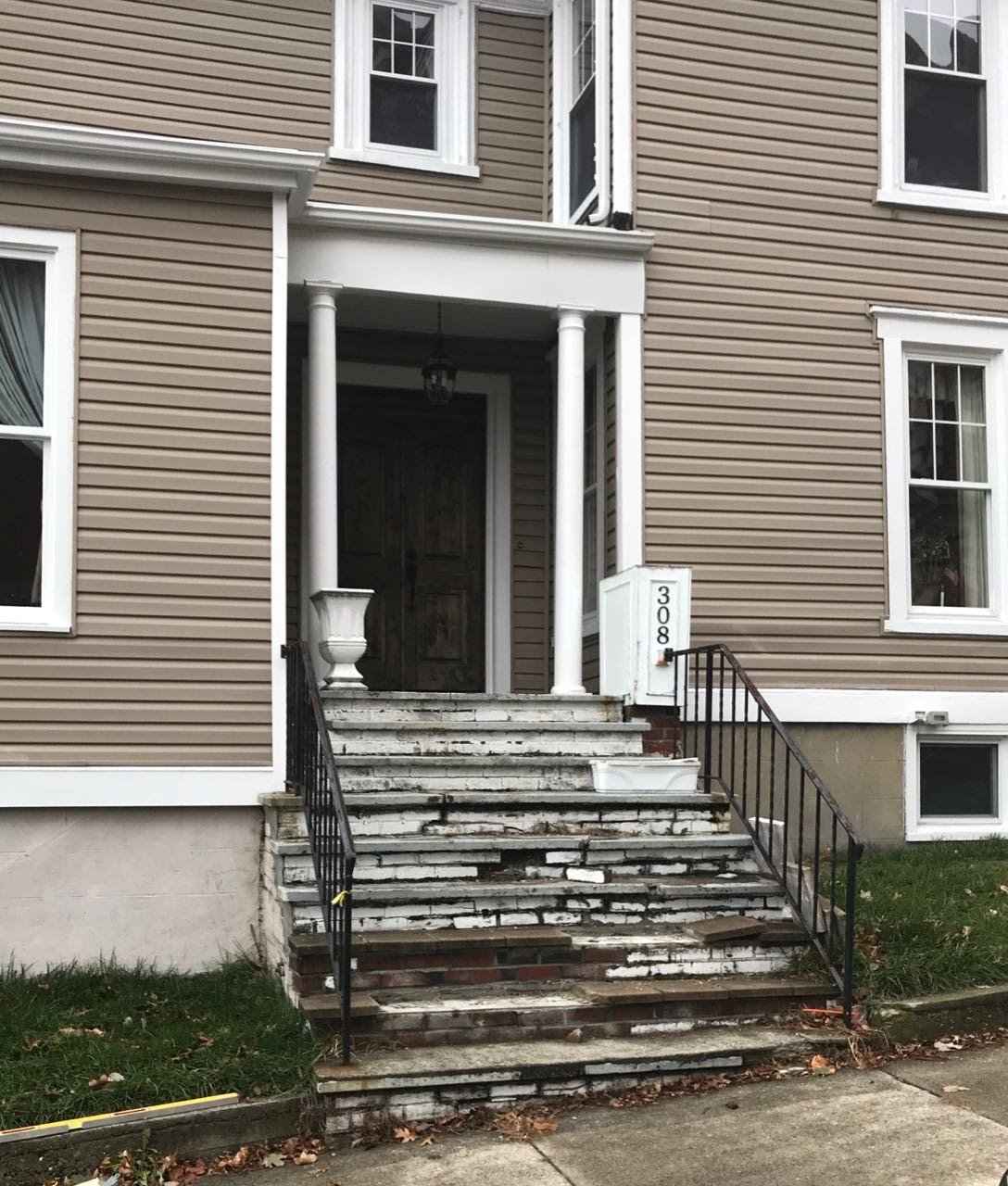 Using custom-ordered eight-inch Woodbury Gray granite steps and modifying some of the slabs on site allowed for a generous landing midway up, as well as pavers from Swenson Granite Works at the top of the stairway filled with fresh stone dust. New pillars flanking the doorway and a custom iron railing drilled into the steps bring this stairway from hazardous to hallelujah.

A brick stairway made for a ho-hum entrance to this home. Not only did the aging steps need to be replaced, but the homeowner was looking to make more of a statement and create a small sitting area.

The revamped entrance gives this home a total upgrade with custom Woodbury Gray granite split face steps, bluestone pavers, gray edging as well as cobblestone edging along the driveway. The rock face, thermal top granite edging creates a frame for the paver landing. A Woodbury Gray granite lamp post and cobblestone apron in front of the garage add to the home’s curb appeal. 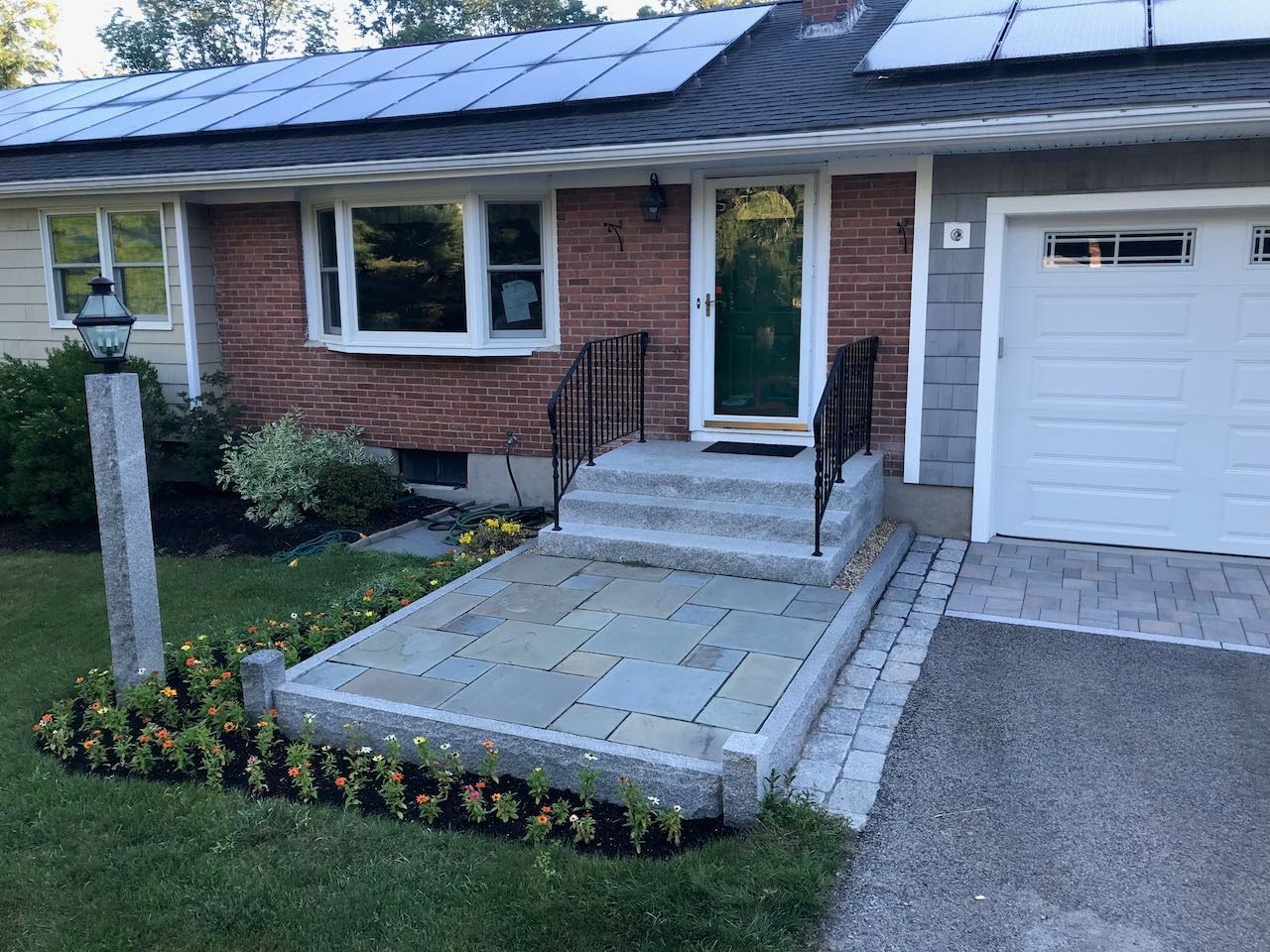 A Diamond in the Rough

Inspired by a neighbor’s granite stairway that Kraus had installed, this homeowner contacted Natural Path Landscaping looking for something similar to replace an old brick pathway and concrete steps. 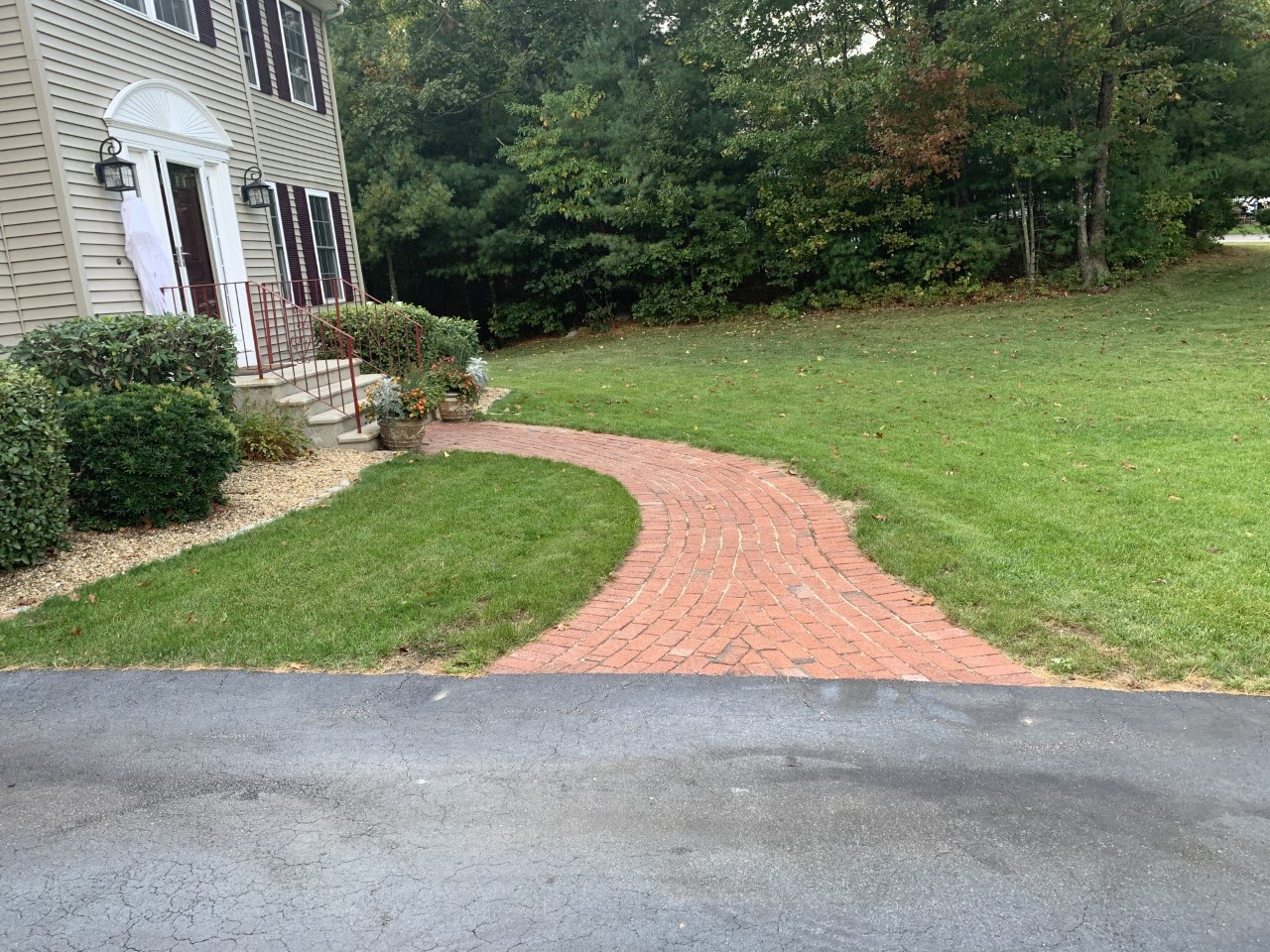 “In our design, we included a large landing that allowed for seating,” said Kraus. The area was so large that instead of a solid slab, the step is composed of a few pieces of Woodbury Gray granite set in between granite treads. Kraus’s team cut a diamond pattern and filled the whole thing with fresh stone dust, which added visual interest to the landing. The natural cleft bluestone walkway is lined with gray granite cobblestone, which provides a crisp edging to the hardscape. 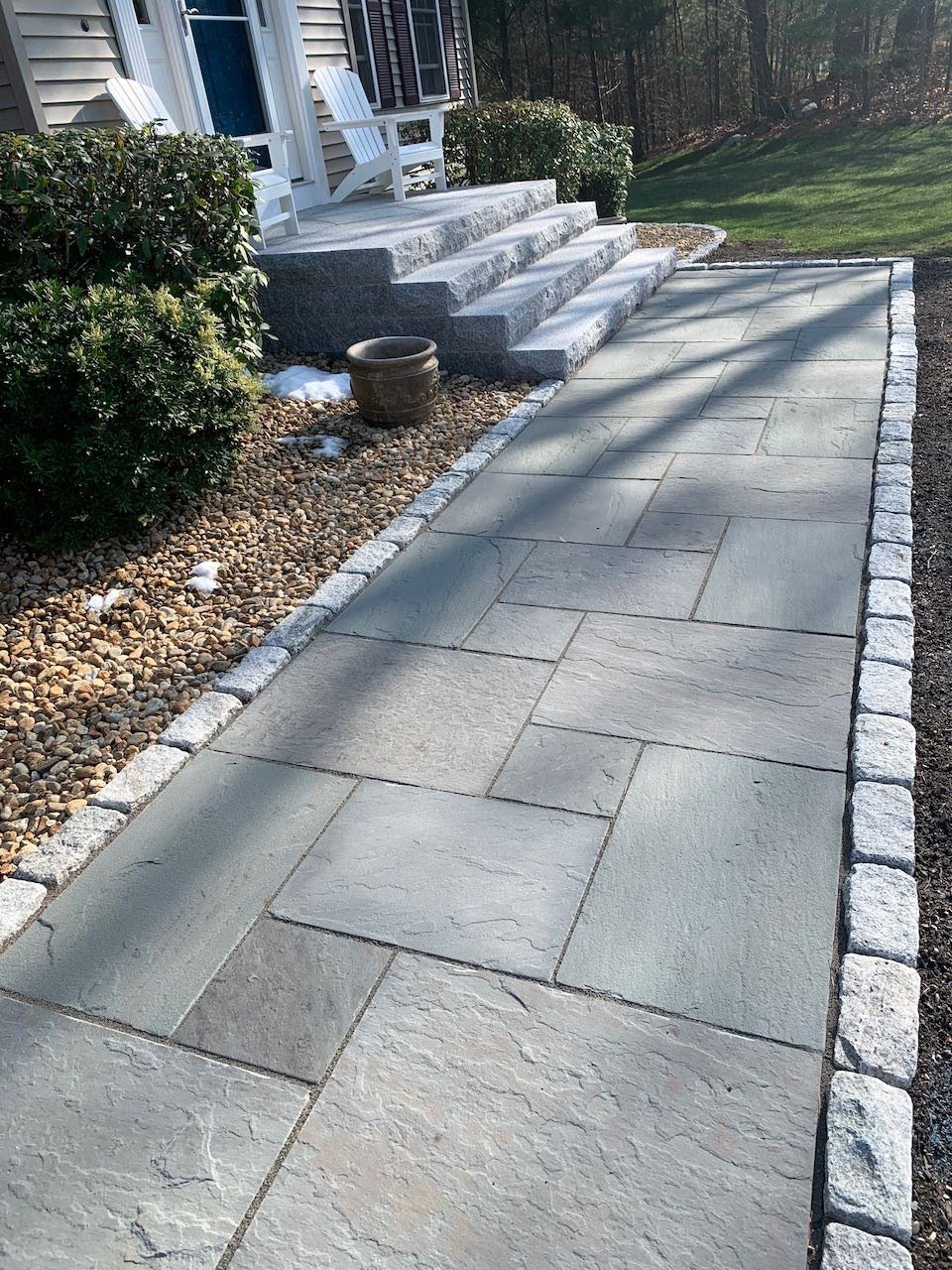 Adding Some ‘Wow’-Factor to a Front Entryway

Kraus’s clients were looking for something “a little bit special” to replace the existing precast concrete entrance steps that offered a lackluster greeting to visitors.

A rounded terraced entryway with plantings to further soften the effect was the upgrade that this front yard needed. Kraus said that working with Swenson Granite Works was important for providing the custom pieces needed. “This isn’t something you just cut on site,” he said. CALEDONIA™ granite pavers on the walkway and landing create a nice contrast to the Woodbury Gray granite steps, and from a safety standpoint, it helps visitors differentiate between the entrance’s multiple levels.

If you've been spending a lot more time at home and thinking about showing your hardscaping a little love, there’s no time like the present to elevate your home’s curb appeal and up your quarantine game.

Interested in adding the classic beauty and permanence of granite steps to your home? Download our Steps and Treads Inspiration Guide to learn more.

Topics: granite steps, before and after